One, amongst many, reasons that I so enthusiastically support and attend PrideFest and its companion events is that, in Hampton Roads, the event creates an unparalleled level of visibility for the LGBT community and an unrivaled safe space. It also creates so much and so many freedoms: to hold hands in broad daylight without worry, to speak freely, to wear what speaks to one's heart -- simple freedoms that many who identify as heterosexual may not even imagine would be precious to those who don't.

Indeed, only one day per year do birds with orange plumage (and glittery gold, neon green, sparkly pink, and so many more brilliant hues) alight upon Town Point Park in Norfolk. The season is short, but glorious, and its rarity makes it precious. 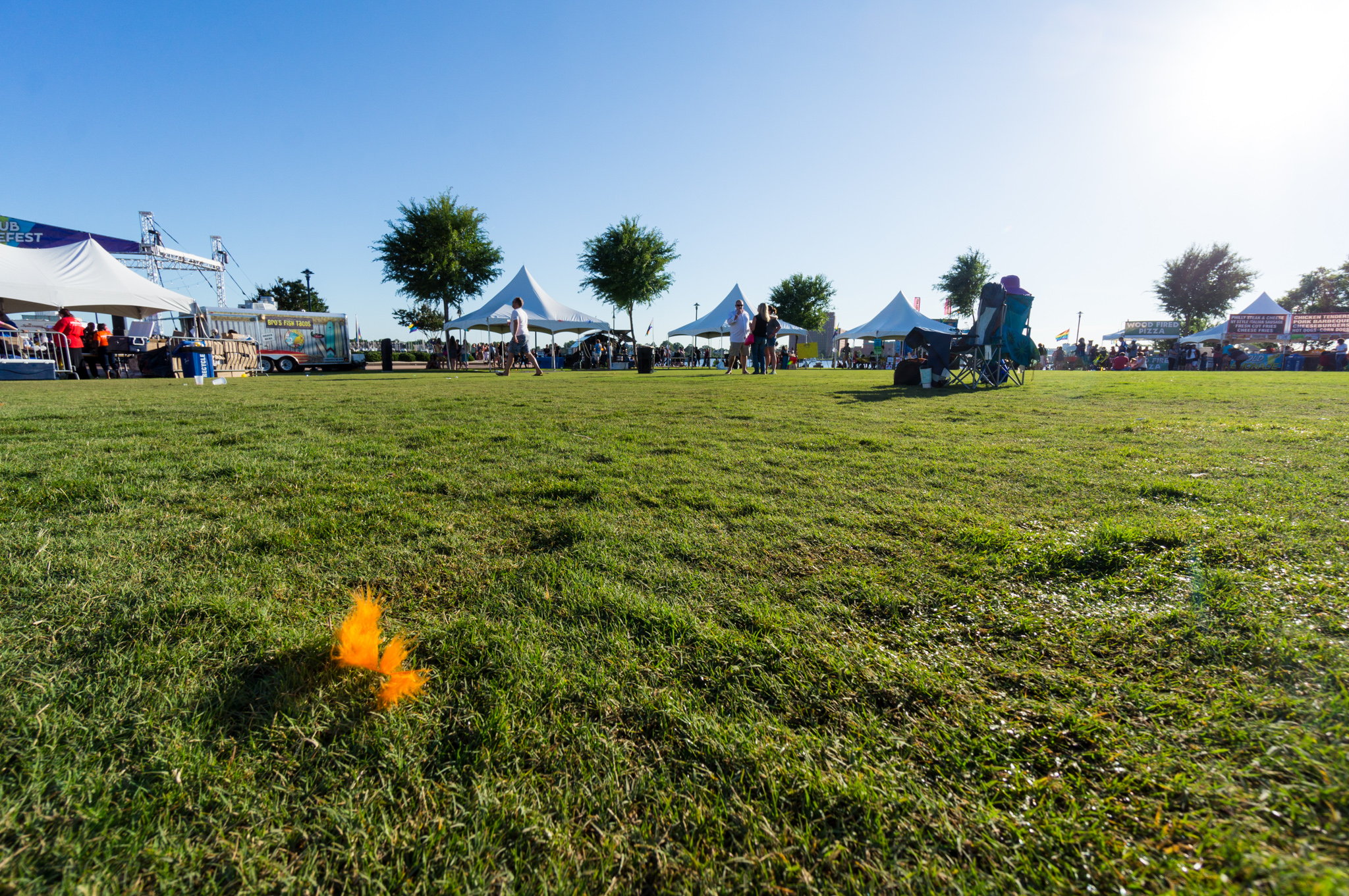 After Hampton Roads PrideFest 2016 had drawn to a close.

In fact, I've referred to the impact of Pride as the Pride bubble. Within it, one forgets for a time about the hatred and intolerance (except for when one is within earshot of the designated protest area, typically occupied by men wielding signs festooned with biblical verses and spouting their disdain for all manner of people), and all is glorious and rainbowed. However, akin to an actual bubble, its perimeter is confined, the walls are thin, and it could pop at any time.

Thus, after having departed PrideFest this past Saturday, I was delighted to see two men, perhaps in their 30s, holding hands on Granby Street at City Hall, a few blocks removed from PrideFest. I wanted to say, "I see you and I love you; thank you for expanding the bubble."

Indeed, I wondered if perhaps they were out of towners who didn't realize that men are seldom seen holding hands in public anywhere in Hampton Roads. (I've had a couple of people dispute this over the years, but I've been here for what's approaching 20 years, and I'm often in the places where such hand-holding would be the most likely, and I've seldom seen it.) Or perhaps the men I saw on Granby Street did know exactly that, and, empowered by PrideFest, actively sought to expand and extend the bubble, and help change minds.

In any event, while within my line of sight, they traveled no further than half a block before their hands dropped away from one another. Perhaps someone said something unkind. Perhaps a menacing glance was slung in their direction. Perhaps they just sensed that their hand-holding was an aberration in that particular space, amongst what might have been a relative sea of men and women holding hands.

Of course, I'd like to think their hands just became sweaty and their fingers naturally parted.

But then, the next morning, as I was on my way out of town for Father's Day, I observed two women, possibly in their 20s to early 30s, who, on a brilliantly-sunny day, were holding hands as they came into my field of view, and continued to do so as they passed in front of my car and then a city bus before heading out of sight.

Again, I wanted to say, "I see you and I love you; thank you for expanding the bubble." And again I wondered whether they were out of towners who didn't realize they were being bold, or whether they were locals determined to live their lives out and proud.

And indeed, so inspiring were these two couples that what I wanted to write and intended to condense into a post on Facebook was a distilled version of portions of the above. However, I didn't get to it in time, because Sunday evening, back in Norfolk, I had a very different experience.

Well...it was nice living in the bubble of Pride for a couple of days, but I suppose we've returned to regularly-scheduled programming.

I was just out for a walk, and as I was about to cross Mowbray Arch near its intersection with the pedestrian bridge to head toward Warren Crescent, I saw someone crossing from the opposite direction. I registered little else other than what appeared to be a younger, African-American woman.

As I'd nearly crossed the street, I heard bass from the sound system of an approaching vehicle, which turned out to be an older, dark green, VW Jetta convertible with a dark top. (Honestly, I'm normally on alert when base is audible from a car at least a block away; if you're so obnoxious as to inject your sound into others' space, you're often just pretty obnoxious, period.)

There were at least two young men inside, anywhere between 18 and 25-ish, I'd say. I was too far away and the light was too dusky for me to better assess that.

Anyway, the car turned around in the road, and I heard one of them yell, "I thought it was some bitch!" Then, hyena-like laughter became very audible.

At that point, I was thinking that my having gone into a slightly higher level of alert had been apropos.

Next, one of them yelled, presumably to the person I'd seen crossing the road, "I thought you were a girl!"

I turned around and looked, but, from some distance away, could not see the individual at whom the remarks had been shouted; presumably, the person -- whatever gender may have been appropriate -- was on the pedestrian bridge at that point.

As I continued toward home, I realized I'd been much less angry over the past two days. I can no longer say that that state of mind appears as if it will endure, but I'll try to continue to think of the sweet people I saw this weekend, though that does nothing for the individual targeted by the buffoons who are very much in need of an attitude adjustment.

While I don't mean to imply that enhanced outness of the LGBT community in Hampton Roads is a panacea for all such ills -- surely, greater outness has not cured all the ills of homophobia in NYC, DC, and the like -- outness does help, ultimately, to result in some folks feeling more comfortable with LGBT people. At a minimum, it certainly helps other LGBT realize they're not alone. And it may at least cause some bigots to keep their remarks to themselves, realizing they may not be in receptive company.

Enhanced visibility is a key reason I erected an HRC equality flag on my porch somewhere around a year and a half ago. I'd derived such comfort from occasionally seeing similar symbols on cars and so forth that I wanted to perhaps offer that comfort to someone else. And LGBT-related symbols on regular display at homes or businesses are still quite rare in this area.

And thus, that is why I say to you that the most beautiful sight on Boush Street right now -- and the most beautiful sight on that street during PrideFest, except for Pride itself -- is the rainbow flag that I believe I first noticed while driving home from work one evening, just a few days before PrideFest on Saturday. And now, each time I pass it, I look at it with some measure of delight, though as I approach, I always hold my breath just a bit, fearful that it might have vanished.

At the top of this post, then, you'll see it, as photographed on Tuesday evening.

"I see you and I love you; thank you for expanding the bubble."

Note: Portions of this post have been repurposed from recent Facebook postings of mine regarding similar topics.