I initially intended this post as a quick shout-out for two LGBT-related documentaries I'd seen in the last few days and enjoyed, though since I wound up straying into review territory for at least one of them -- which was perhaps inevitable, considering the subject matter of the second film -- the length of this has expanded.

While both of the films are essentially about finding a place to belong and finding one's tribe, the settings and situations are almost polar opposites.

On the one hand, there's an enormous amount of drag and whimsical fantasy in "Coming of Age in Cherry Grove: The Invasion," which chronicles the development and evolution of the uber LGBT-welcoming community of Cherry Grove on New York’s Fire Island, though the story is related through the lens of the present-day phenomenon known as the “invasion,” which results in a massive influx of people to the island on July 4. 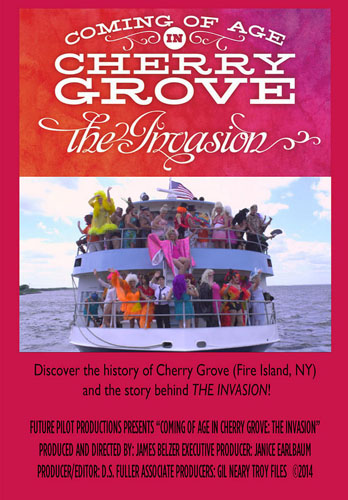 Considering that lore and legend have constructed in my mind a vision of Fire Island as a place of respite and freedom similar in league to San Francisco -- albeit a smaller, seasonal, resort version thereof -- I’ve long been curious about it.

During the course of the film, whilst chronicling a place that seems to embody the spirit of live and let live, some wonderful gems and observations about life emerge here and there. And running through it is a thread of respect for one another that I find worthy of celebration.

While the film boosted my interest in visiting Fire Island, inasmuch as it suggested there might actually be a place there even for me, my concerns about the culture of the glorification of body-beautiful above all else would still tend to exert upon me a restraining influence. It should be noted, though, that those concerns were stoked not by the film, but by other stories about the destination, as well as my awareness of the ideals of gay-male physicality, to which my reasonably slim, but most certainly not gym-sculpted body, does not adhere. And obviously, in a resort area, there exists certain expectations about cavorting in something less than streetwear, and deftly defying those expectations can sometimes be difficult to achieve over the course of time.

Lastly, though, before moving on to the next film, I'll mention that quite a few of the people interviewed for “Cherry Grove” were well into their lives as senior citizens, and I'm glad that their stories and perspectives were captured while there was still an opportunity to do so.

On the other end of the spectrum, though, quite apart from drag, senior citizens, and beaches, there's "Straight Acting: A story about queers and sports," which features a significantly younger group of individuals, including an awful lot of gay rugby players, cowboys, hockey players, and the like. In essence, the film weaves together stories of those who, through athletics, found men with whom they could identify, strong and meaningful friendships, a place to belong, and themselves. 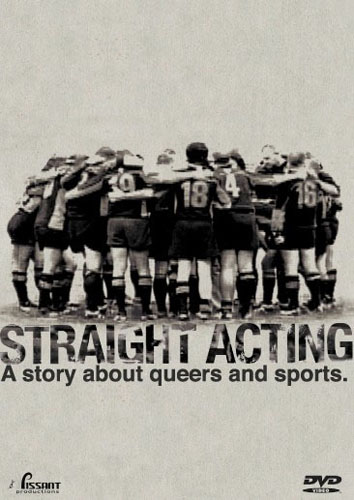 At the center of the documentary’s story arc is the filmmaker himself, who eventually, as a result of learning about and joining a gay rugby team, was able to embrace his gay sexual orientation, leaving behind the shackling vestiges of shame that surrounded his same-sex desires, the origins of which he attributed to his Mormon upbringing and what he otherwise knew about gay men at the time (bearing in mind, though, that this film is, by now, a decade old).

Of course, given the way in which the term "straight-acting" often grates upon my nerves, inasmuch as it tends, in my experience, to be parlance deployed by gay men who wish to suggest, implicitly or otherwise, their superiority over those who can’t honestly don such a label; have issues fully accepting their own sexuality; and/or have difficulties even being kind, in a social setting, to other gay men who can't evade detection with respect to their own sexual orientation, I had reservations about the film. In fact, early in the film, there’s a depiction of a simulated personals ad that says, “Straight acting male seeks same.” In the segment immediately following, a number of the gay men profiled in the film are asked what they think about the term “straight-acting.” One replies that he doesn’t know what to say about it, another hesitates and says nothing, while the remainder pan it, a couple of them doing so quite vociferously. In other words, so far, so good.

However, the next question posed is “What does ‘straight-acting’ mean to you?” and as that’s slowly unpacked over the course of the documentary, a couple of the men remarked upon their inability to identify with the images of gay men to which they’d been exposed via the media and in bars and clubs. In a small portion of that commentary, there were a couple of remarks and intimations that might offend those who would not be deemed "straight-acting" by the uber-masculine, as some may choose to see in those remarks a subtext of implied inferiority.

For the most part, though, the men come across, at least in the interviews, as being respectful of the spectrum of the rainbow, and ultimately, I found it a joyous film, though one can't help but yearn for the presence in one’s own life of such a warm brotherhood and camaraderie as had been experienced by those in the documentary, should one find that absent in one’s own life, as I have.

As it were, neither film is particularly recent. "Cherry Grove" is about a year old, while "Straight Acting" is ten years old, and I have my doubts that the latter would even be made in this day and age, considering the vast amount of progress that has transpired over the past decade with regard to LGBT acceptance and attainment of rights. Nonetheless, “Straight Acting” remains a valid expression of thoughts and feelings many men coming to terms with their same-sex attractions probably continue to have, though perhaps less frequently so as more and more athletes choose to emerge from the closet and serve as role models for those more inclined to work it out on an athletic field than a dance floor.

Beyond that, I view “Straight Acting” as a wonderful celebration of the transformative power of finding one’s tribe and, in the specific circumstances of the film, a meaningful brotherhood. Indeed, it presented a joy that transcended my computer’s monitor and conveyed vicariously, borne aloft, to some degree, by the wings of a hope that we might all find our respective tribes, while “Cherry Grove” presents a vision of a form of utopia, where all are welcome.

Before wrapping up, I’ll note that both films have a couple of relatively minor technical issues, at least in the streamed versions I saw. ("Cherry Grove" has blown audio levels in some of the interviews, while "Straight Acting" exhibits a few overexposed scenes.) Had I not mentioned them, though, you may not have noticed, unless you’re attuned to audiovisual norms and practices, and certainly, these should not deter you from watching the films, as I’d not have bothered to have written this if I’d wanted something other than to have encouraged their viewing. Indeed, I recommend both, and both are currently watchable for free on Hoopla if your public library (like Norfolk's) has an arrangement with that digital media provider. Additionally, “Cherry Grove” is currently streamable for free for those with an Amazon Prime subscription, while “Straight Acting” is currently available on Hulu.